Welcome to the carnivore section! In this section we will be talking about the killers that ruled in the early/late jurrasic and the early/late Cretaceous period.

First we have the velicoraptor.It lived 84 - 80 million years ago which was in the Cretaceous period. Of course they fossils were only found in Europe and Asia. The babies weighed about 15-30 pounds and were about 3 feet tall. An average adult was 6.8 feet tall and 12 feet long. This meat tracker is a predator we beilive they use to hunt in packs as many as 6 in a pack despite their size they are known as one of the most vicious and fastest dinosaurs around they ran at a speed of 40 mph!They begin to take care of themselves around 3 months old and their lifespan was around 15-20 years. Velociraptor, which means speedy thief, the most lethal weapon this killer had was a sharp, deadly, sickle-shaped, retractable, 3.5-inch claw on each foot, to pierce the flesh of its prey. 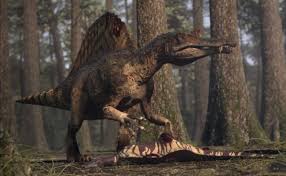 Up next we have the spinosaurus, what makes this different than any other dinosaur you may ask well it could swim for starters. It also had a sail on its back the help guide it through the water. Unlike most big predators during this time the spinosaurus had an addition finger with claw meaning only had 3 fingers. This big predator lived during the Cretaceous period in North Africa, but its diet mainly consits of fish such as Onchopristis and Mawsonia. The full adult of a spinosaurus would be up to 15 meters (49 feet) in length and weighed anywhere between 7 to 20 tons. The most lethal weapon the spinosaurus had was it long snot like nose with six or seven needlelike teeth on each side of the very front of the upper jaw and another 12 teeth behind those. On top of that they had claws that were about a meter long. 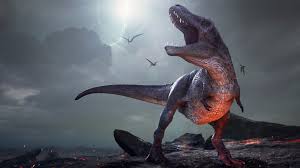 Up next we have one the only predators against the king of the dinosaurs the alpha predator was the king known as the Tyrannosaurus rex.This predators life span was around 30 years. They weighed about 13,000 – 32,000 lbs. The T-rex for short is one the most dangerous predator of its time period. what made this predator the most dangerous was the bite force of this deadly creature. Its bites force was 12800 psi, easily being able to crush through the bone with no problems.